CELEBRATING 30 YEARS OF BREWING THE ONLY WAY WE KNOW HOW... BY BREWING A NEW BEER!

After 30 years of brewing up award-winning beer in the heart of Yorkshire, launching our very first lager has been a whole new learning curve but with the help of Carl Heron and our brilliant brewers, we’ve created something we’re very proud of.

Being a traditional brewery, our bitters, milds and pale beers have always been a priority but dipping our toe into the world of the Pilsner has been on the agenda for a while. Drawing inspiration from classic European Pilsners and using yeast from Berlin, our Pilsnor is deliciously crisp and clean tasting making for an easy drinking, tasty beer.

The original idea of brewing a Pilsner came from Managing Director Craig - "For several years we have been aware of a gap in our portfolio for a lager and decided to go with a traditional style as our first offering as it most suited our brewery and what we are all about. As we are primarily an ale brewer our knowledge of lager brewing is limited so we brought in Carl who has been a friend of the brewery for several years to assist us in this new venture."

Covid had postponed the process for two years which just meant it tasted all the sweeter when we finally received the first kegs and bottles back in the brewery a few weeks ago.

Carl Heron, of Heron Brewing Support, has extensive experience in lager brewing, so was ideal for helping us on this project. 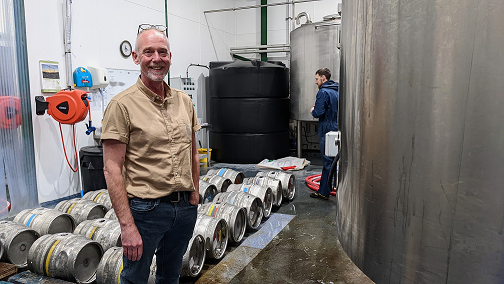 Carl is from Yorkshire and graduated as a Food Scientist, starting his interest in the world of food and drink. Over the years following this, he worked at various breweries in the lab, including Websters and Tetley brewery. He also spent some time as bottling line manager before moving to Scotland and then becoming a Master Brewer in 2000. Carl then spent time working for Tennents Brewery. This was eventually bought out by the Belgian company ‘InterBrew’, who Carl also worked with for a few years. This then became ‘InBev’.

After a value engineering meeting he was invited to, he came into contact with some colleagues from Belgium and started working with them across central Europe. "I travelled all around this region doing product development for places like Becks, Leffe and Budweiser".

When it came to deciding what sort of lager to brew, for Carl, a Pilsner was an obvious choice. We wanted a clean, crisp taste and other options, such as Helles, are more full and heavy tasting. "Pilsner has more hop aroma to it, with more layers of flavour and generally leaves more to be discovered with the brew".

We wanted to make something that was tasty but refreshing and easy drinking. We discussed other variations but the Pilsner seemed to fit with what we were after. It also had the benefit of lending itself to the Nordic theme of the brewery with the easily altered name, Pilsnor.

We like to include a nod to our brewery home’s past when we can, Pilsnor seemed like the right decision.

What exactly is different about brewing a Pilsner then? Well, the temperature to start. "We use quite a low temperature and when it ferments down, it has a lower final gravity, which gives that clean crisp finish when drinking." Carl tells us.

Then there is the hopping process, "We add hops at the beginning and middle of the boil, we also then dry hop with the Styrian Wolf hop in fermentation, in order to get the essential oils out"

"The actual water chemistry is slightly different too, brewing salts are used to mimic the water of the Pilzen in the Czech Republic, which is the home of this kind of lager. It creates an ionic profile that is identical to that water. The brew sits between a clean, crisp, harsher German Pilsner and the full bodied flavour and structure of a Czech Pilsner, without the bitterness." Carl tells us that it is the level of calcium and chloride in the water at this point in the process which helps lead to the clean mouth feel of the beer.

How do you go about choosing from the hundreds of hop varieties? Carl helped us with this too. "I love the Slovenian Aurora hop and have used it in a number of beers in the past, I learnt about it through Charles Faram Hop Merchants who work in a great area to grow hops. It is a more traditional hop" 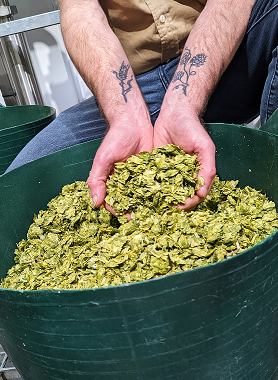 Styrian Wolf is the other hop used in the Pilsnor and is less traditional for a Pilsner than the Aurora. ‘Slovenia is also close to the Czech Republic, so it made sense to give it a go’. The process of hopping included adding Styrian Wolf at the end of the brew to dry hop with. It gives an interesting and unique flavour to the Pilsnor which makes it a more one of a kind offering on the Pilsner market.

If you want to give it a try, you can head direct to the shop with the link below. 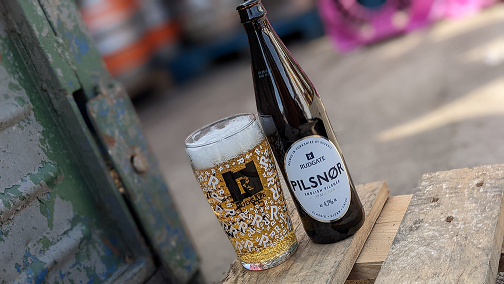